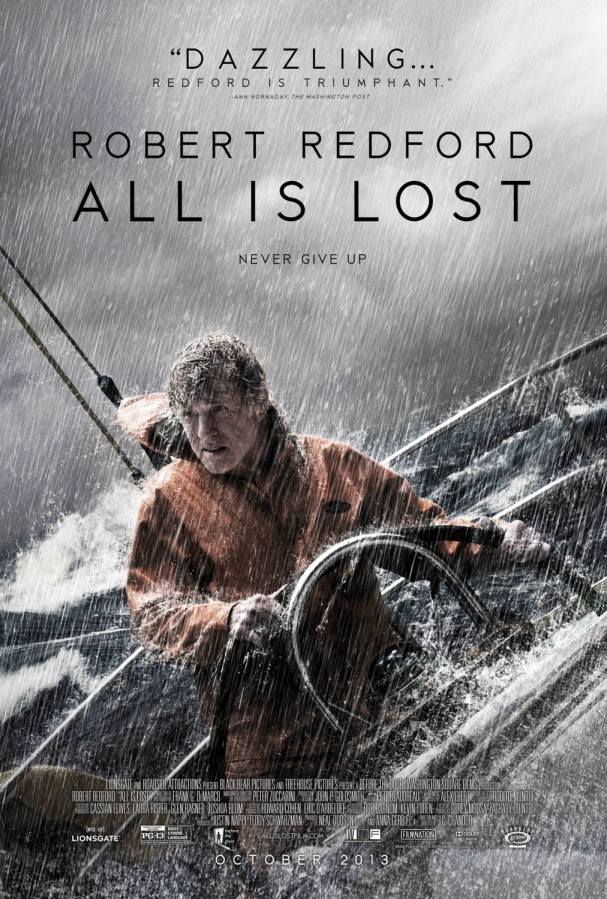 This is a deceptively simple film. One character, almost no dialogue, and only two ‘sets’ as such. The story is a series of problematic events chained together in one long journey. It relies heavily on Robert Redford, as the only actor on screen, to make that journey work. And work it does.

At the very beginning of All Is Lost we hear the only passage of speech Redford will have in the entire film. He is writing a letter to his family proclaiming his impending death, knowing they will never get to read it. From there we jump back to where the disaster began, Redford is enjoying a solitary boat trip through the Indian Ocean. A floating shipping container comes along and sends him on a futile quest for survival. The scenes that follow evoke equal parts The Life of Pi and Captain Phillips but without the psychological positioning. Our man remains remarkably calm throughout, focusing on overcoming the situation at hand despite what nature is throwing at him. As time goes by, things only get worse, glimmers of hope arise and are dashed over and over. How much more of this can he take?

Director JC Chandor apparently had Redford in mind from the beginning for this role, and it certainly paid off. The calm, but rugged charisma he brings anchors the film’s simple, and frankly quite depressing, plot. I would venture there are few other actors who could have pulled this off, considering the lack of dialogue, and even emotion, there is to play with. We believe Redford, who is looking damn fit for his age, as the relatively skilled yachtsman, and we root for him to overcome the considerable odds he faces. He also physically dominates almost every frame of the film, as director of photography Frank DeMarco, who worked with Chandor on Margin Call, maintains a very close distance. The claustrophobic style isn’t so much oppressive as it is in, say, Gravity, although it serves the purpose of keeping us in the character’s space as we imagine what is going through his head. It is not so much about the scenery or the effects as it is the human aspect. Alex Ebert’s score emphasises this too, by being very unobtrusive for the most part, though it does occasionally break the subtle mood with melodrama.

All Is Lost may be too stark and simple for some tastes, however look past the surface and it is a compelling ride. Redford’s performance is solid and understated, serving well as the key element of the film. Depressing as it may be, it is a study in the futility of life. Man’s quest for survival against all odds is a tale that fits the everyday as much as it fits the extraordinary. Despite knowing his fate, as we all know our own, the man carries on, and the film’s ending is hauntingly beautiful. A worthwhile journey.