What a fun and quirky film this is. Those words have become pretty synonymous with  the films of Indie auteur Wes Anderson, thanks his plethora of bizarre idiosyncrasies. With this project his style seems to have really found its place. Everything, from the production design to the acting, has gelled so well, and you get the sense that this is a proper realisation of his vision. Although I have generally found his work enjoyable, in the past it has often felt just that little bit too removed – with the exception of his brilliant 2009 stop-motion Fantastic Mr Fox. This time around, the nail has been hit on the head, and his version of reality is beautifully constructed and thoroughly inhabitable for characters and audience alike. Ralph Fiennes carries the bulk of the movie alongside young Tony Revolori, with a script full of gems. There are also the obligatory, but delightful, Bill Murray and Owen Wilson appearances.

The Grand Budapest Hotel was truly the place to be, in its 1930s heyday at least, nestled on a snowy slope in the fictional republic of Zubrowka, named after a Polish vodka. The patrons are rich and glamorous but the staff are the real attraction, namely Feinnes’ well groomed Monsieur Gustave who offers special attention to the elderly, single, female guests. He is generally shadowed by his apprentice, Revolori’s lobby boy in training, Zero, as they go about various important business. When Gustave is framed for the murder of one particular guest by her very sinister family, headed by Adrien Brody, the story switches to an outrageous caper narrative as the pair decide to make off with a priceless painting in defiance. Chaos ensues and Zero’s girlfriend Agatha, growing talent Saoirse Ronan, is dragged in along with Bill Murray’s M. Ivan and his secret hotelier’s society. Meanwhile the executor of the dead lady’s will, Jeff Goldblum’s Deputy Kovacs, tries to bring order despite the efforts of the wacky but dangerous Jopling, Willem Dafoe as a sort of Schutzstaffel type to Brody’s Dmitri. This hijinks is presided over by Zero’s older self, Scarface actor F Murray Abraham, narrating in conversation with Jude Law’s travelling author.

Ralph Fiennes seems to perfectly suit Gustave, presenting him at once as a sad and vain but totally endearing character. His adherence to old world values, however self-serving they may be, adds to the film’s charm and pseudo-historical setting. He has some tremendously funny and clever lines too, which makes for an enjoyable time following the rollercoaster tale of the ‘liberally perfumed’ man and his sidekick. The cast as a whole is wonderfully brilliant, ranging from straight to screwy – including smaller, but equally delightful parts by French actor Mathieu Amalric, as bizarre butler Serge, and Harvey Keitel as jailbird Ludwig. The story, inspired by the work of Austrian writer Stefan Zweig, is very easy to follow but still surprises at the right moments, with good amounts of humour and quirk thrown in. 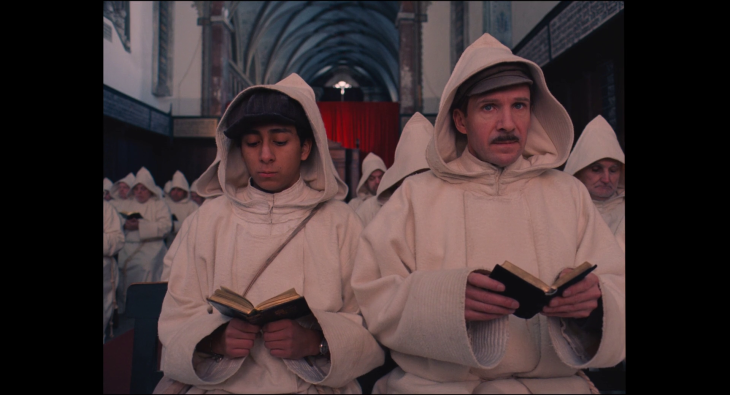 The style of the film is very much in keeping with Anderson’s directorial sensibilities, featuring everything from insert shots, to title cards, beside double takes and strange looks from the characters. There is liberal use of wide-angle lens too, with many scenes set out in straight-on shot compositions and including seemingly boundless camera movement, always featuring colourful palettes. Regular cinematographer Robert Yeoman has these techniques down pat by now, and the unconventional framings blend with the story world much more seamlessly here. In fact, the only real change for the project is that regular music collaborator Mark Mothersbaugh, of Devo, wasn’t involved, although considering the setting this makes sense. Instead there is a simple but magical score by the rather busy Alexandre Desplat, composer on Imitation Game and Unbroken. 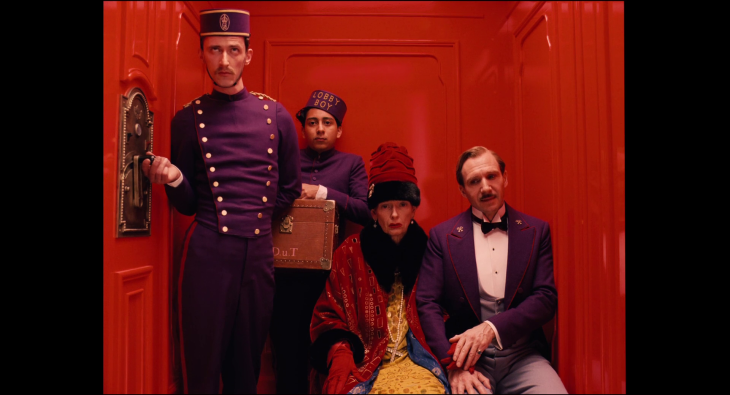 The Grand Budapest Hotel marks Anderson’s maturing as a filmmaker. That may sound cheesy or just plain silly, but that’s the way the production feels. His style has evolved subtly just enough to suit the kind of movie he is making here. It has something to do with the material he’s writing, as the more romantically fictionalised worlds seem to fit better with his approach. There’s also the fact that he has put together a truly impressive cast, who all seem to get what he’s doing. In general, everything about his style works on this film, and for the picture as a whole, to endearing effect.