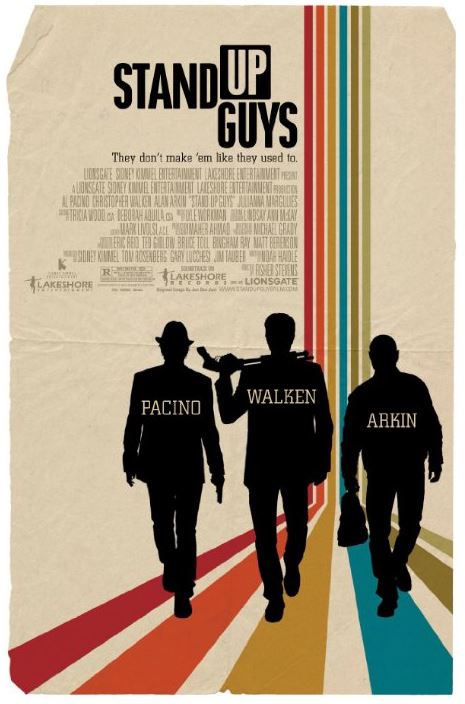 I don’t know how Stand Up Guys flew under the radar like it did, I don’t really remember it being talked about after its release, a shame really. This is a stylish, well crafted film that sticks to its guns and offers a fun and surprisingly touching story. The comedy ranges from understated to a little outrageous without getting out of step, the silly and the serious interwoven deftly by a superb cast. One look at that list and it’s little wonder this is such an enjoyable movie. Christopher Walken is straight guy Doc, who meets up with the virtuous but much wilder Val, Al Pacino, on Val’s release from a long stint in prison. Val insists on hitting the town, leading to a crazy night that proves age hasn’t dulled the street smarts of these ex-cons. Along the way they deal with impotence, prescriptions, hospitalisation, and spring other long time friend Hirsch, Allan Arkin who is hilarious as always, from a nursing home. Their night continues into chaos as they go joyriding, rescue a kidnapped Vanessa Ferlito, Silvia, and come to terms with settling an old score.

Underlying the very natural performances of these greats is a solid script by newcomer Noah Haidle. It seems to provide the perfect platform for the actors to be badass, while remaining a character driven, or even actor driven, buddy movie. Under the guidance of actor and director Fisher Stevens, mostly a documentary maker, the story strikes a great balance of humorous and heart-warming, both playing an important part in treating the themes of getting old and accepting life. The action is captured in some stylish camera work by Michael Grady, embracing the retro style of the film and really giving the stage to the actors. This is all backed by a cool and fitting soundtrack of old Rhythm & Blues and some original songs provided by Jon Bon Jovi, channelling a bit of Woody Guthrie. Wearing its influences on its sleeve, this is a movie that owes a lot to the great 70s portfolio of its cast, and works because of the age and experience involved.

I was disappointed to see this movie hasn’t really received the credit it deserves. The low marketing budget and small release (a mere 659 theatres for the US release) obviously did it no favours. To put that in perspective, the rather average zombie rom-com Warm Bodies opened the same week on over 3000 screens, and made over 20 times as much. Regardless, Stand Up Guys is a thoroughly enjoyable, funny film with a heart. Do yourself a favour and check it out, especially if you’re at all a fan of good acting.